The Christkindlesmarkt in Nuremberg, Germany is famous allover the world, crowded and as fancy as possible. And it’s one of the city’s largest attractions – so it is in Chicago, IL.

This year the 10th Chicago’s Christkindlmarket takes place at Daley Plaza and counts more than a million visitors each season. Opening at Thanksgiving, Nov. 22nd, it closes at Dez. 24th.

The organizer’s say that the Christkindlmarket provides >a unique and christmas-like shopping experience which is different from Magnificant Mile and State Street<.  No wonder, most of the „hardware“-exhibitors are German, offering Lauschaer Glas and Plauener Spitze, some White Elephants, too.

The sweets and christkindl-foods are most important for the market, however the majority comes from the States: e.g. Helmut’s Original Austrian Strudel travels from Honeybrook, PA to Chicago. Dinkel’s is already here since 1922. Also the cultural events are mostly held by americans, highlighting the Milwaukee Donauschwaben on Dec., 1st.

Germany (still) is the world’s export leader, you’ll feel it in Chicago these days.. 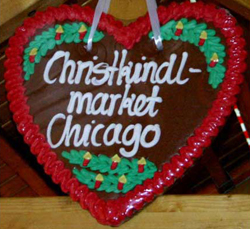